Love Your Book Shop Day: why they are surviving

What is it that makes a great book store? It’s the question a lot of people will ask across the nation today as they gather at their favourite booksellers to celebrate national “Love your book shop” day.

For avid readers like Corinne Johnston of Gymea Bay, it’s a great range for all ages and interesting quirky gifts, which she finds at her local: Berkelouw Books in Cronulla. For Anne-Valerie Slater Saulnier of Bronte, it’s Harry Hartog in Bondi Junction for its regular author events and book club. And for Grainne Murphy of Newtown it’s Urchin Books in Marrickville for its community involvement and two resident cats.

Bookseller Anna Low, who bought the Potts Point Bookstore 11 years ago, says it is about more than just being a beacon for the bookish. “We’ve worked hard in our neighbourhood to be a safe place for anyone to come in and sit and read, to create community,” she says.

In the last year, according to Nielsen, Australians bought 55 million books at a value of more than $1.1 billion, an increase on the previous year. Despite dire predictions that the 600 or so independent book shops across the country would disappear with the arrival of Amazon last year, and even as far back as 2011 when a quarter of Australian book shops closed overnight due to the collapse of the Red Group – which owned Angus and Robertson and Borders – they are far from disappearing.

In Spectrum, award-winning author Bram Presser writes about his love of book shops. Today’s events, in book stores across Sydney, can be found at loveyourbookshopday.com.au

The book is undergoing something of a renaissance, thanks to Hollywood movies.

Joel Becker, Australia Booksellers Association CEO
“‘You did what?’ they asked … I’m only half joking when I say I went into this eyes wide closed,” says the former New York Times and New Yorker writer and lawyer. For more than 30 years, he has spent summer holidays on the Northern Beaches with his wife Jane Perlez, an Australian journalist who is currently the Times’ Beijing correspondent. When he heard his favourite bookshop, Avalon’s Bookoccino, was for sale in January this year he offered to buy it on the spot. He intends to move the Avalon staple, which was the first coffee shop/book store in Australia when it opened in 1992, across the road into new premises where it will be a bookshop/wine bar. “Bookoccino by day and Bookovino by night,” he says.

Although he’s not a fulltime Australian resident yet, he went into business with local Sally Tabner, who skippers a boat with her two children everyday to the store from her home in Lovett Bay.

“When I walk around town with Ray he says you’re like the local mayor you know everybody’s names and everybody’s tastes, which helps you know what books to recommend them,” she says. She believes it is the “three” Rs that sell books: “recommendations, review and radio – when an author gets on [Radio National’s] Richard Fidler’s conversation hour the books race off the shelf”.

Mr Bonner said he was convinced to buy the store because he knows his business partner Miss Tabner has a wide knowledge of all sorts of books, which is what readers want.

“I’m not going into this to be the next Jeff Bezos … I’m doing this because I have always loved books,” says the 76-year-old who is still a contributor to the New York Review of Books.

“Now when I tell my New York friends I pay myself to read books they get it. They all say, ‘what a dream job’.” 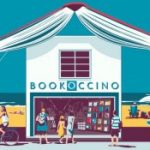